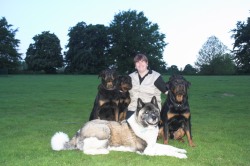 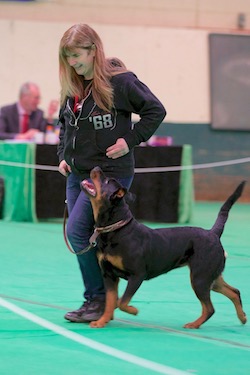 Julie, along with her husband John, got their first dog together in 1996, a Rottweiler called Roxanne. Julie trained her at a local Club, obtaining the Kennel Club Good Citizen up to Gold level. (RIP Roxanne).

18 months later, having been bitten by the bug, John & Julie bought a male Rottweiler called Prince. It was whilst training Prince and encountering the usual problems with an adolescent male dog, that they sought out a different training school, and this change in training technique with Prince proved to be so successful that they were both invited to assist instructing in the classes. John then went on to work Prince in competitive obedience.

Since then they have owned a Japanese Akita (Diefenbaker) and currently live with seven Rottweilers whom they compete in both obedience and IPO.

They have attended Crufts, demonstrating obedience, as well as Discover dogs where their dogs are available to meet the public and help people understand the true nature of the breed.

To have her own training school was an ambition of Julie’s for some time and Blackdogtan was founded in 2006 where it quickly gained a reputation of being a forward thing and friendly club to attend. 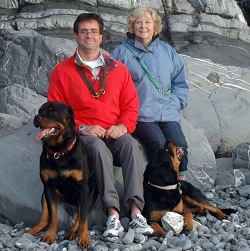 Jane has owned dogs all her life and has always trained them to be well mannered pets within her home.

Back in 2005 Jane and her husband Simon decided to adopt a dog from their local RSPCA Centre and having passed the home check, came home with Sasha, a beautiful but quite troubled Rottweiler.

A friend recommended John and Julie to help with Sasha’s problems and they attended classes with her coupled with some one-to-one training. Sadly Sasha has now passed to Rainbow Bridge, but was the start of their fondness for the Rottweiler and to Jane’s interest in dog training.

Jane runs one of the puppy classes and is also on hand to help with the other classes when needed. 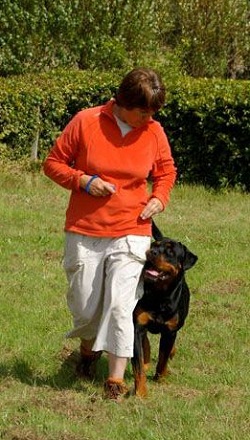 Jenny has owned various breeds of dogs including a Toy Poodle, Afghan hound, and a Doberman but in 1984 along with her husband bought their first Rottweiler Zoe, a breed that she immediately fell in love with and chose to remain with.

It was whilst training Zoe in a local Rottweiler breed club that Jenny was asked to become treasurer of the club as well as helping them organise their breed shows.

In 1989 Jenny bred her first litter of Rottweilers and became interested in showing and judging the breed. She has succeeded in breeding show champions and has very high standards on her breeding ethics. Jenny is qualified to judge dogs in both open and championship shows. She is available at the club to talk to anyone who is thinking about breeding their dog and wanting more advice and will also help anyone wanting to show their dog, although we do not hold specific ring craft classes.

Jenny currently owns one Rottweiler, Fred who has been trained to compete in obedience.

Jenny, along with Julie, teaches the Beginner and Advanced Classes. 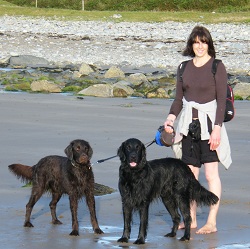 Maria is Jane’s sister in law and first attended Blackdogtan with her first Flatcoat Retriever, Gunner, and then later with her most recent Flatcoat, Theo.

Maria runs one of the puppy classes and is also on hand to help with the other classes when needed.

Blackdogtan is very fortunate to have a team of friendly helpers who are on hand to man the desk doing the administration work, and to help the trainers in the classes when needed.

This Club has helped me a lot, especially with my rescue Rottweiler, Barney. It is very friendly and informative.